What is particulate? How does it origin? Which problems does it create?

Before think the merry flames of a fireplace, then a dish that is cooking on a gas stove. Which types of images do you create in your mind? Probably, in the first case a restless yellow and red flame, which constantly changes shape. In the second case, however, it will probably emerge in your mind the image of a quiet blue flame. What is the difference between the two?

In the course of the article we will provide answer to this question by analyzing one of the best known forms of pollution: the atmospheric particulate.

In particular, we will analyze together three different aspects which characterize the particulate.

Let’s start by answering the first of these three questions. The information contained in this article are mainly taken from an interesting analysis written on Chimica & Ambiente magazine [1].

What is the particulate?

Is it called the set of particulate air pollution in the atmosphere, coming from natural or anthropogenic source. In fact the earth’s atmosphere, whether you analyze urban areas is that you analyze remote areas, has a high concentration of particles (of the order of 108 to cm3). It is not so much the number of particles that counts, since their feature size. 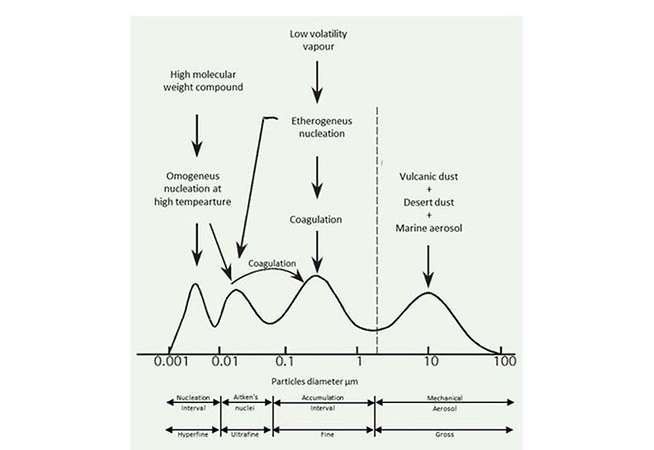 In this interesting image, taken from the article mentioned above [1], we can see how the size of the various particles cover a very wide range, ranging from nanometer-size to hundreds of microns. To make a discussion as thoroughly as possible of particulate air pollution, it appears to be useful to consider different ranges of size characteristics: 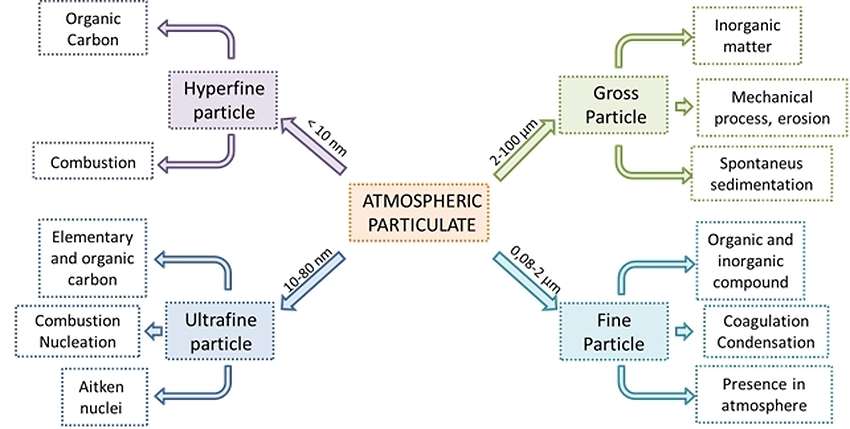 Now that we have examined what the particulates and various geometrical dimensions that characterize it, is appropriate to carry out in depth its origin. In particular, we will examine how the particles is produced in combustion processes.

How does particulate is form?

If the processes of formation of many pollutants are clear, the same can not be said for the formation of the particulates. The steps that lead to the formation of these carbonaceous particles are very complex, and are characterized by intricate reactions between the multiple chemical species that are generated in combustion processes.

In the article dedicated to the TAR, where we analyzed the definition of equivalent ratio and the methane combustion mechanisms. In that same article we had seen as the onset of high concentration of fuel zones (Φ >> 1) leads to the development of pyrolytic conditions, in which the termination of two methyl radicals and subsequent dehydrogenation give rise to the formation of acetylene. Acetylene, in turn, allows the genesis of benzene and species of poly-aromatic (PAH) compounds. It is from these aromatic species that form soot and black carbon! 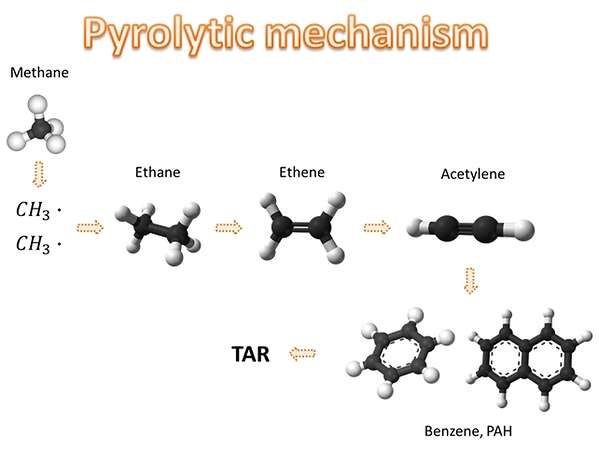 The poly-aromatic compounds have a planar geometry, but their growth induces Van der Waals forces to operate in coagulation processes, with consequent assumption of three-dimensional geometry. In this way they generate the primary soot particles, which subsequently undergo graphitisation processes and surface growth. From these particles, by means of coagulation mechanisms and absorption, the structures are generated with larger diameter characteristics of fine and ultrafine particles.

If these structures were to meet some rich areas of combustion, we have that the characteristic times of oxidation of polyaromatic compounds and carbon particles are such as to make them difficult to complete oxidation. In other words, they will meet such structures in the outgoing gas flow.

These considerations bring out an important warning:avoid the creation of fuel-rich zones in combustion processes!

So, how to promote adequate mixing?

In the gas phase there are two different modes of management of the combustion process:

If we consider the combustion of liquid and solid species, we can notice that the mixing phenomena are further complicated by the presence of different phases. In this case the key to better manage the oxidative process is to ensure a large contact area between the fuel (solid or liquid) and the comburent (gaseous). In the case of liquids, this is achieved by creating a fine dispersion of droplets. In the case of solids, could be useful to try to use material with a reduced feature size. 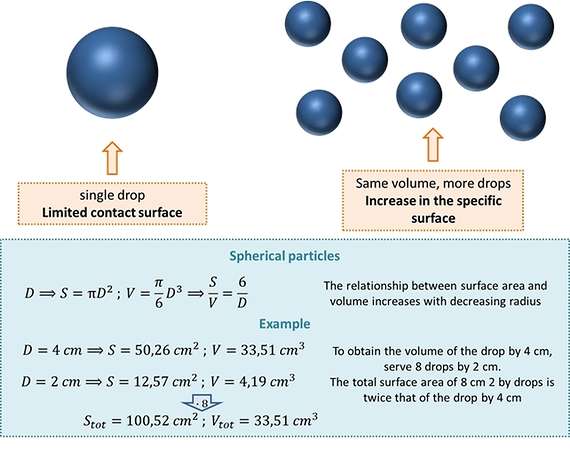 Now that we have analyzed the nature of particles and the mechanisms that generate it, we make considerations about the consequences that this pollutant has for the environment and to humans.

Which type of effects has got on health and on enviroment?

Imagine to clean a yard full of small rocks, and then clean a sand-filled courtyard. The two series are very different: the size characteristics of the rocks are significantly higher than those of sand, and this makes them easier to remove.

Even for the health and the environment, the impact appears to be closely related to the size characteristics of the particles involved. We begin by examining the health effects.

The health effects of particulate matter are significant. From epidemiological studies it has shown that there is a correlation between the presence of particulates in the atmosphere, and an increase of the levels of mortality and hospitalization. Consider that in London, in 1952, they were recorded mortality increases on the order of 4000 deaths a week to a concentration of particles in the order of 4 mg / m3.

Today, fortunately, thanks to technology development of production processes, the concentration of dust in the air has been drastically reduced. It is also true that the current pollution levels are not harmless: nevertheless have consequences for health, and in particular, some studies have shown that the most significant consequences were related to smaller particles. The size of the particles are the same, therefore, the main parameter to consider its harmfulness to human health. The cells in fact react with the surface of the particles, rather than with their volume: the presence of adsorbed materials on the surface can then depositing harmful compounds in the same cells.

As you can imagine, the apparatus hardest hit by this category of pollutants is the breathing. The size of the particles considerably influence their degree of penetration into the respiratory tract. In particular, the particles having a size greater than 1 micron are easily intercepted and deposited in the nose and throat, and then be duly expelled. The particles between 100 nm and 1 micron can reach up to the bronchioles, there they are conveyed to the throat and be removed in a relatively short time. 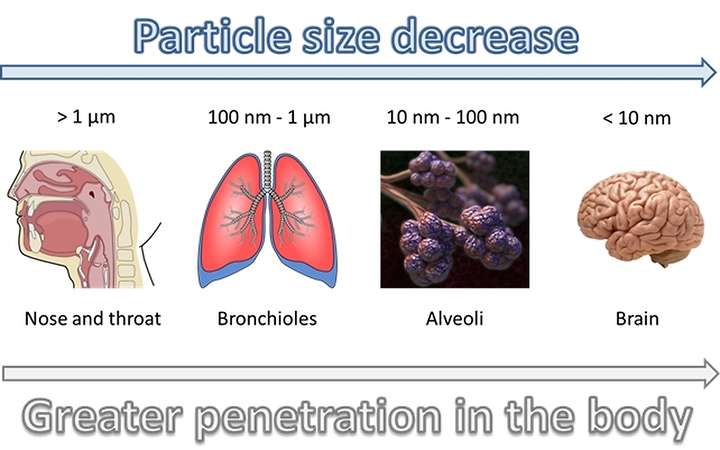 If we consider of still smaller size, the situation becomes more problematic, since the particles are not retained by the nasal or bronchial mucosa and can penetrate to the alveoli. In this case the removal mechanisms appear to be less efficient and less complete, with important consequences for health.

If we consider the hyperfine particles, it could emerge at the neuronal level of problems.

A study by the University of Rochester [2] has indeed shown that the hyperfine particles can interact directly with the central nervous system, settling near the olfactory nerve endings and spreading to the brain. Taking into account the potential accumulation of these particles, they may emerge of severe neurotoxic effects.

The environmental effects of particulate matter are quite complex. In fact aerosols dispersed into the atmosphere are involved in a complex manner with the thermal radiation incident and reflected from the Earth, as a function of their concentration, morphology, optical properties and solubility. We can distinguish different aerosol families, and separately analyze their effects on the Earth’s climate. 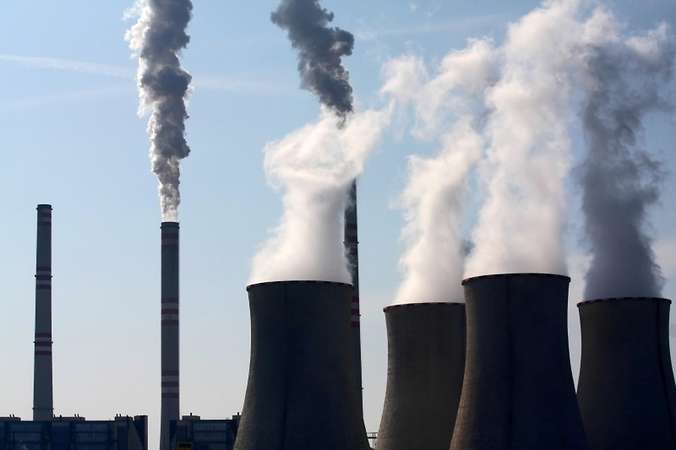 The particles in fact facilitate the genesis of droplets in clouds and fogs, acting as nuclei on which condensation takes place of water molecules. In high pollution areas it is had that the particles contribute greatly to the number of drops of water that make up the clouds, contributing to reflection of the incident solar radiation.

Thus, we have seen many on particulate information, how it is formed and which influence has got on health and environment. In a new article we want to answer a key question: how is it possible to remove particulates that is formed in various industries?

In the meantime, look at our Case Study and discover our solutions to reduce pollutants!

See you soon with new information! 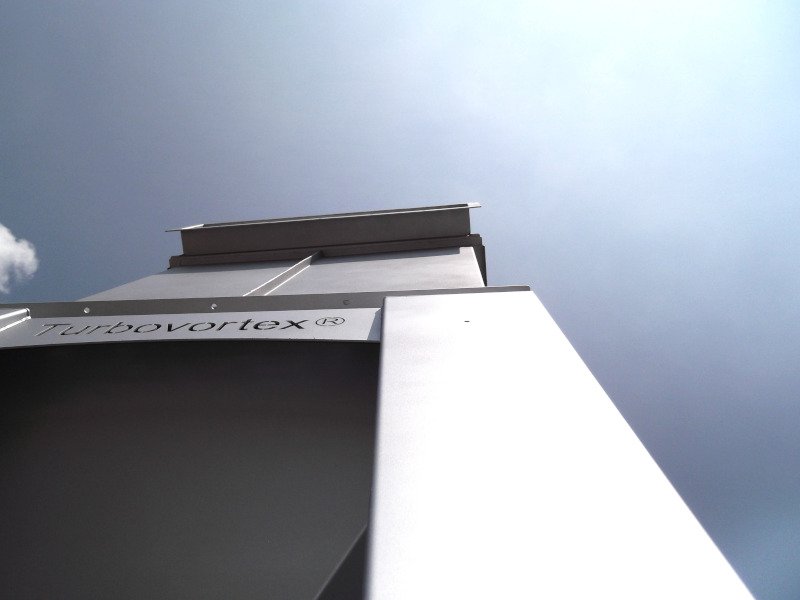 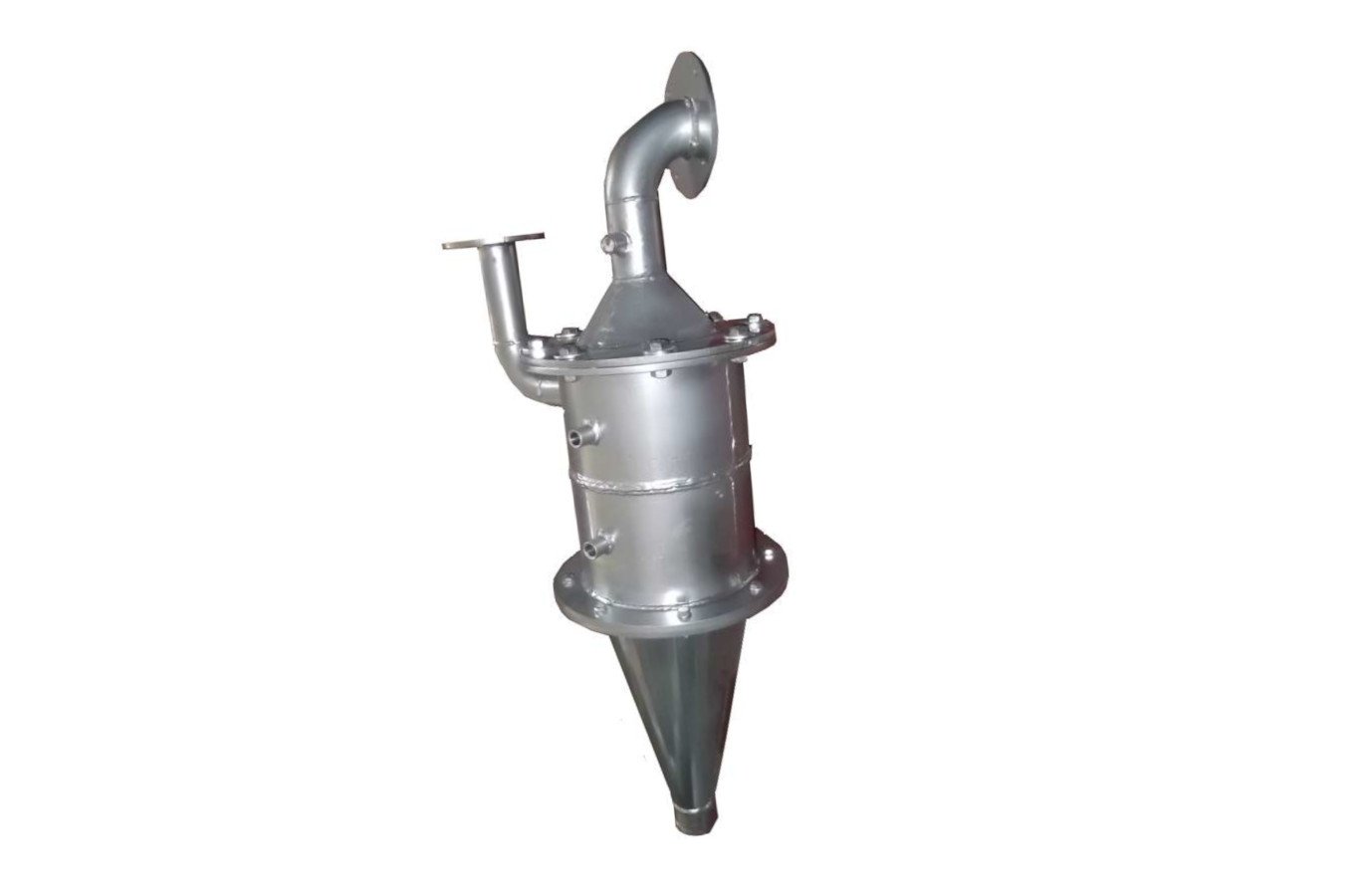 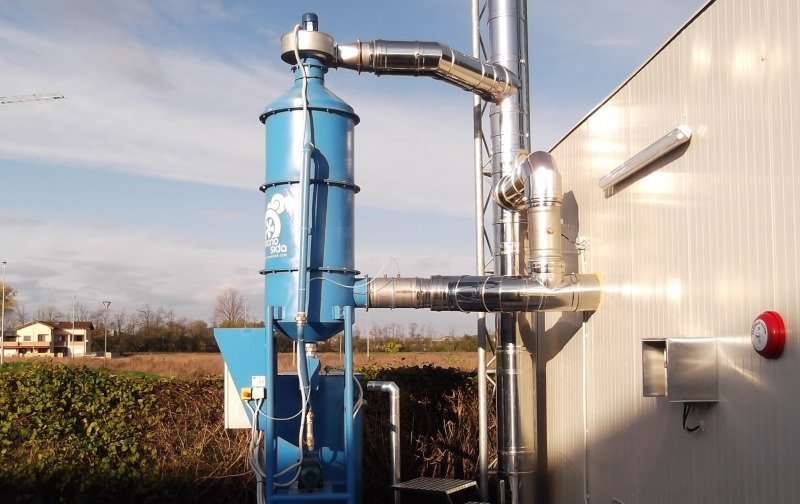 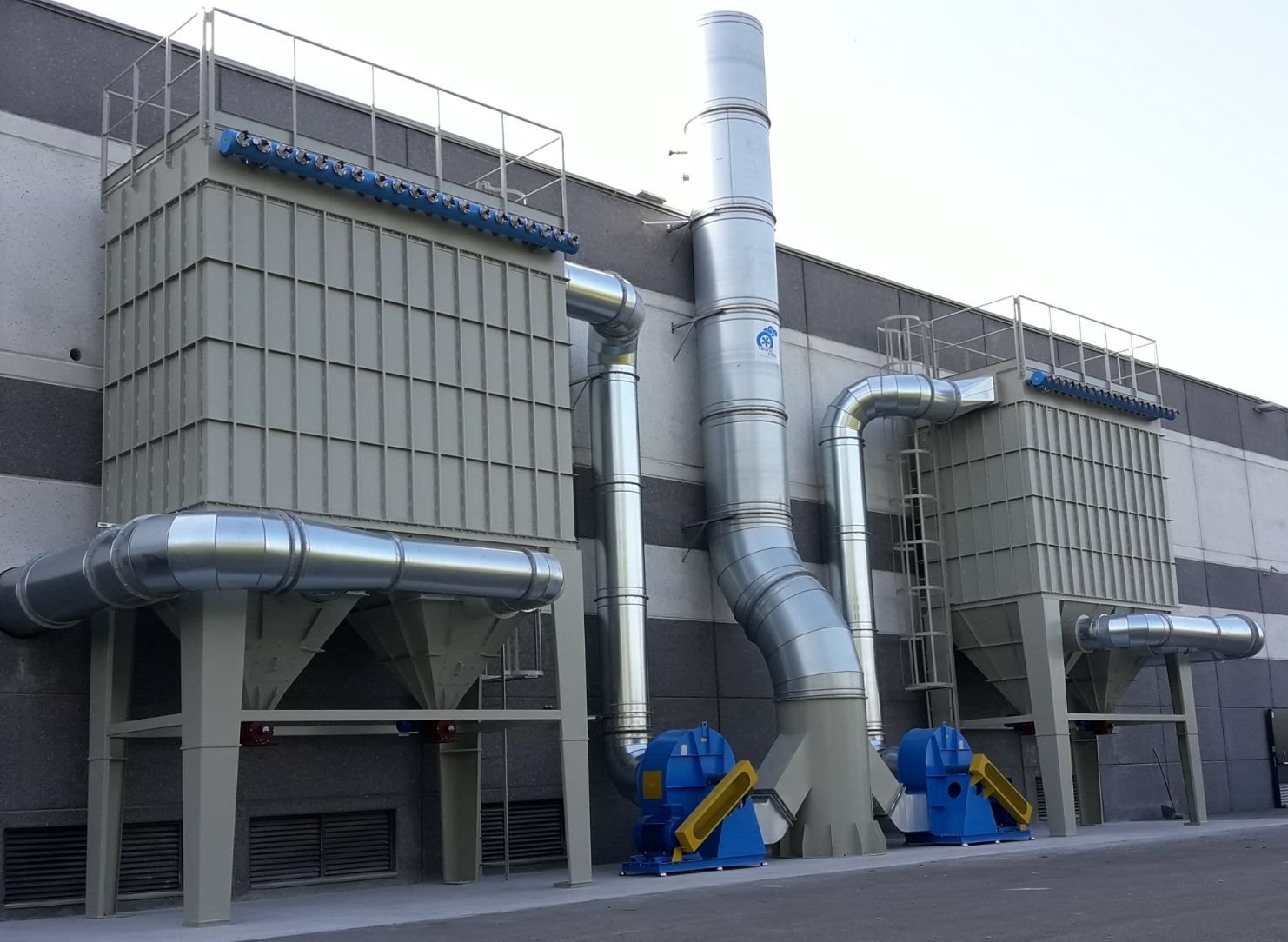 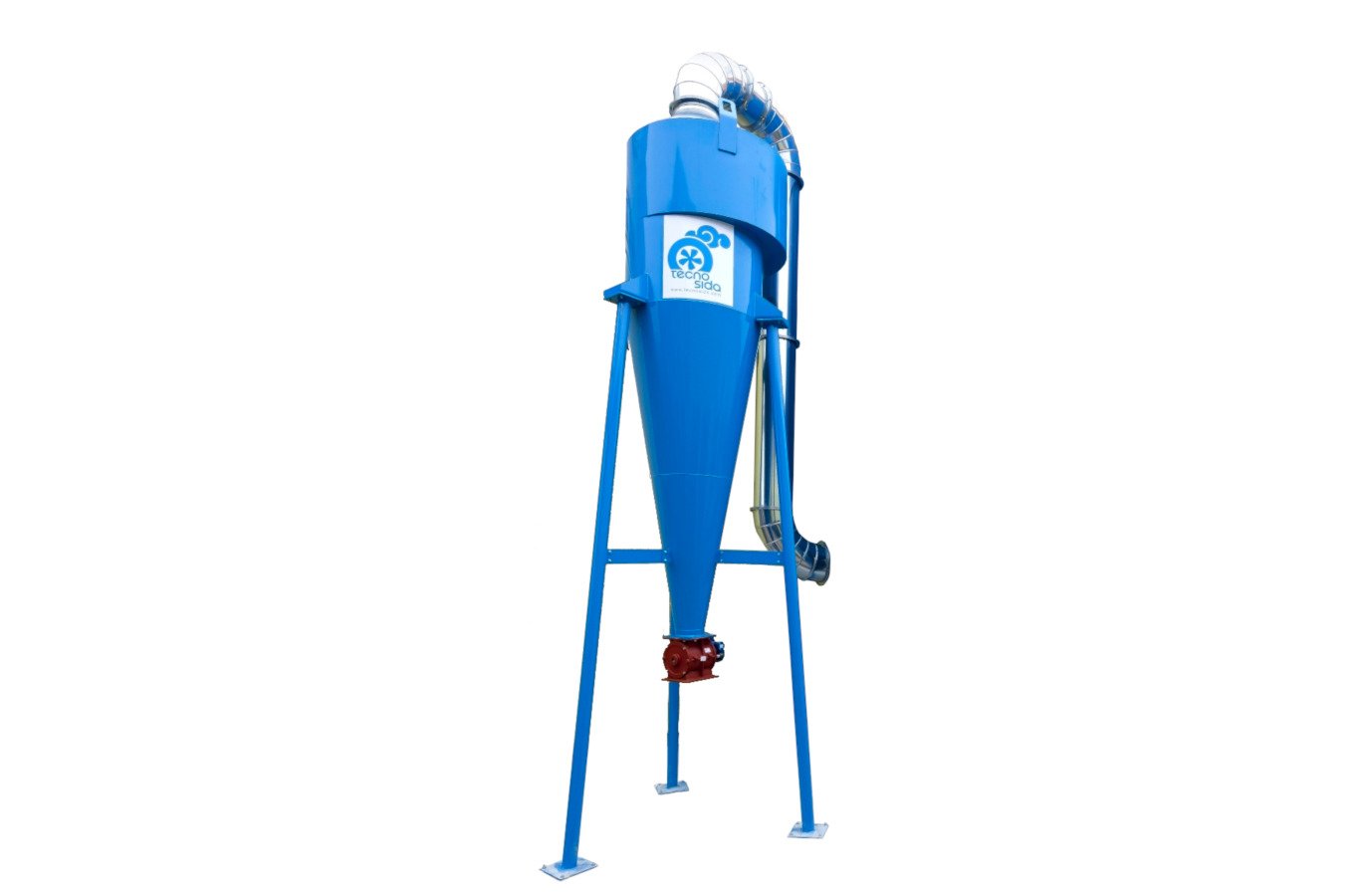 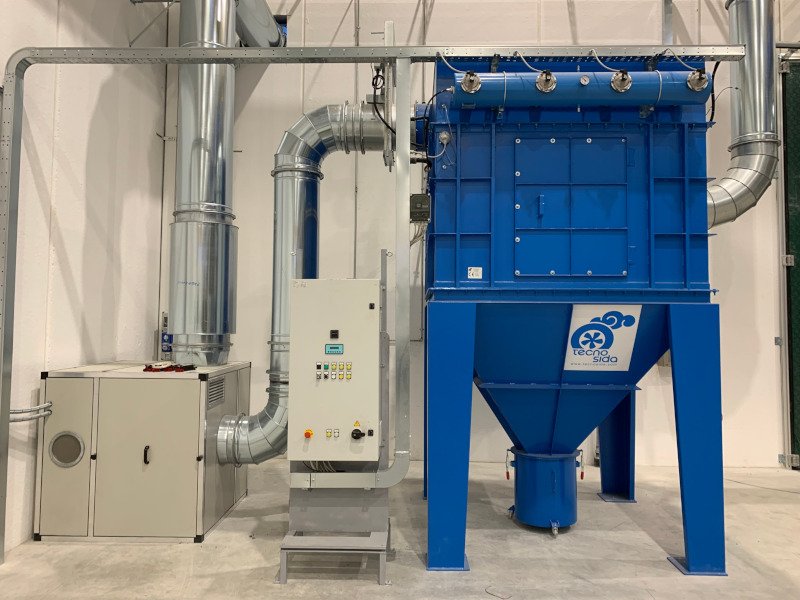 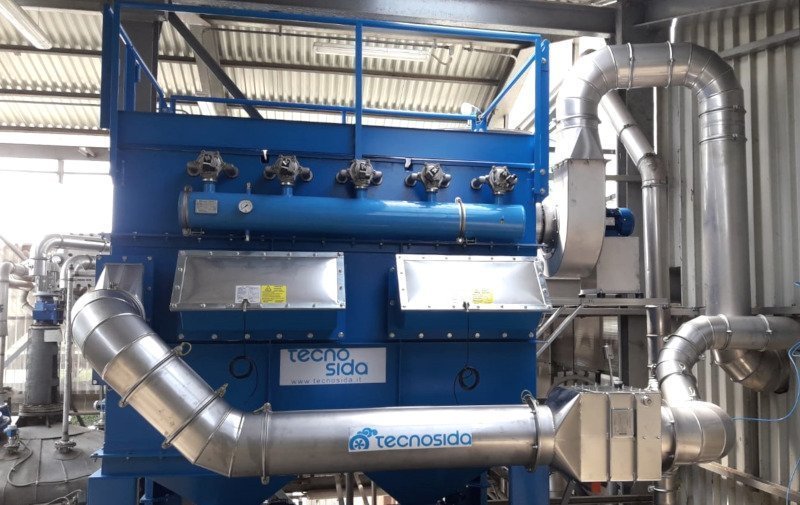 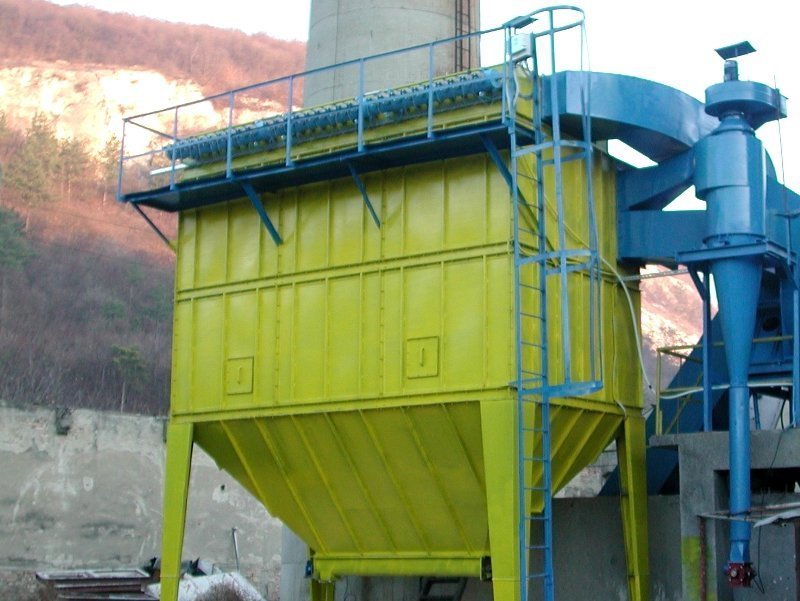 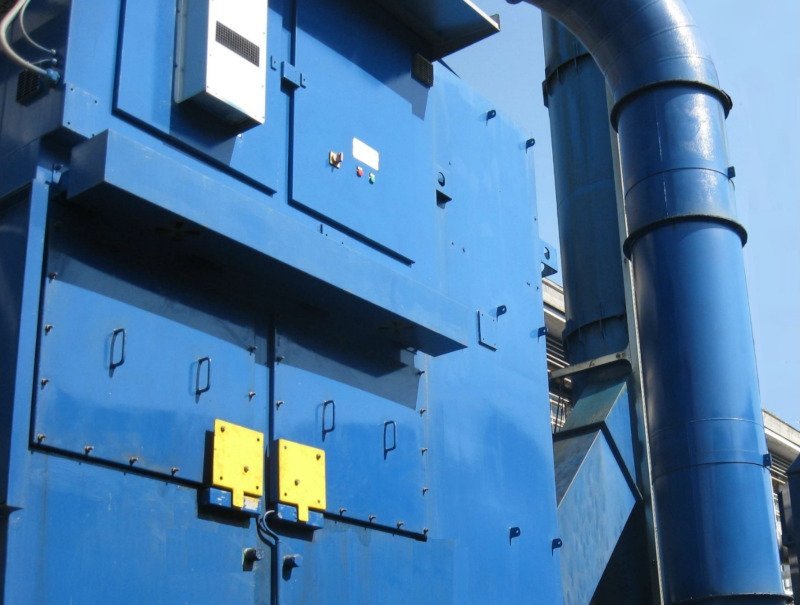